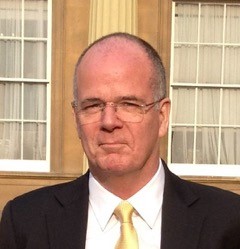 John is a visiting senior fellow at King’s College London Department of War Studies, associate fellow at RUSI, and freelance consultant to OECD and others, on emergency/disaster risk and resilience. From 2006 to 2012 he lead government work on national resilience building in the Cabinet Office Civil Contingencies Secretariat, which supports the Prime Minister and Cabinet on issues relating to civil emergency planning and resilience strategy. During that time, John was programme director

for the National Resilience Capabilities Programme, a portfolio of over 20 government-wide projects or programmes designed to improve national resilience. He also played a leading role in government contingency planning for some of the highest impact risks of disaster for the UK. He played a significant part in designing and implementing a national infrastructure resilience programme. But John was probably best known – nationally and internationally – for his work on country risk assessment. He developed the UK’s National Risk Assessment to the point where, in 2009, this was acknowledged as best in class internationally by the OECD. He pioneered work on risk communication in the first National Risk Register, a version of the National Risk Assessment designed for small businesses and communities, and also rated innovative best in class by the OECD. His experience in these areas gave him a significant role in development of the first National Security Risk Assessment for the Government’s National Security Strategy in 2010, and its review during 2012. He initiated, designed and delivered the first Safety and Security Strategic Risk Assessments for the 2012 Olympic and Paralympic Games; and was involved in developing the Climate Change Risk Assessment for the UK first published in 2012. He was awarded the CBE for his work on civil resilience and the development of the National Risk Assessment in the 2013 New Year’s Honours list.