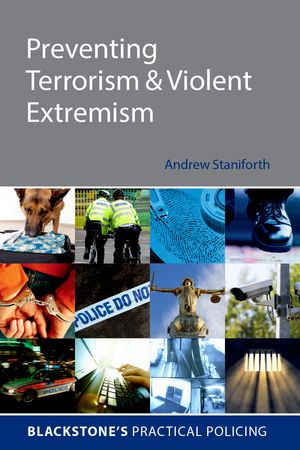 Illustrates key operational guidance on responding to terrorist emergencies, focusing upon the important role of Neighbourhood Policing and community intelligence to tackle terrorism and violent extremism

Provides practical explanations of anti-terror powers and provisions for the front line police officer, including stop and search, powers of arrest and terrorist offences

Offers clear and detailed explanations of the terrorist threat to the United Kingdom, covering terrorist methodologies and the terrorist radicalization and recruitment process

Providing you with an accessible and authoritative guide to neighbourhood policing and the counter-terrorism measures available to police officers, Preventing Terrorism and Violent Extremism presents the tools and operational know-how needed to tackle the range of threats to both national security and community safety.

This book places counter-terrorism policing within the setting of everyday operations, allowing you to assess how provisions under CONTEST 3 and Prevent can be incorporated into day-to-day neighbourhood policing tasks and patrols. With case studies offering a range of common scenarios, clear explanations of national policy, and detailed coverage of anti-terror powers and procedures, Preventing Terrorism and Violent Extremism will support you and your colleagues through the complexities and challenges of delivering successful community policing. Definitions of the concepts and classifications of berita terkini isis, as well as summaries of extremist motivations supply background and context to the current status of UK national security, while detailed translations of the law and official guidance surrounding counter-terrorism provides both the practical and theoretical underpinning required for clear interpretation and application of such powers.